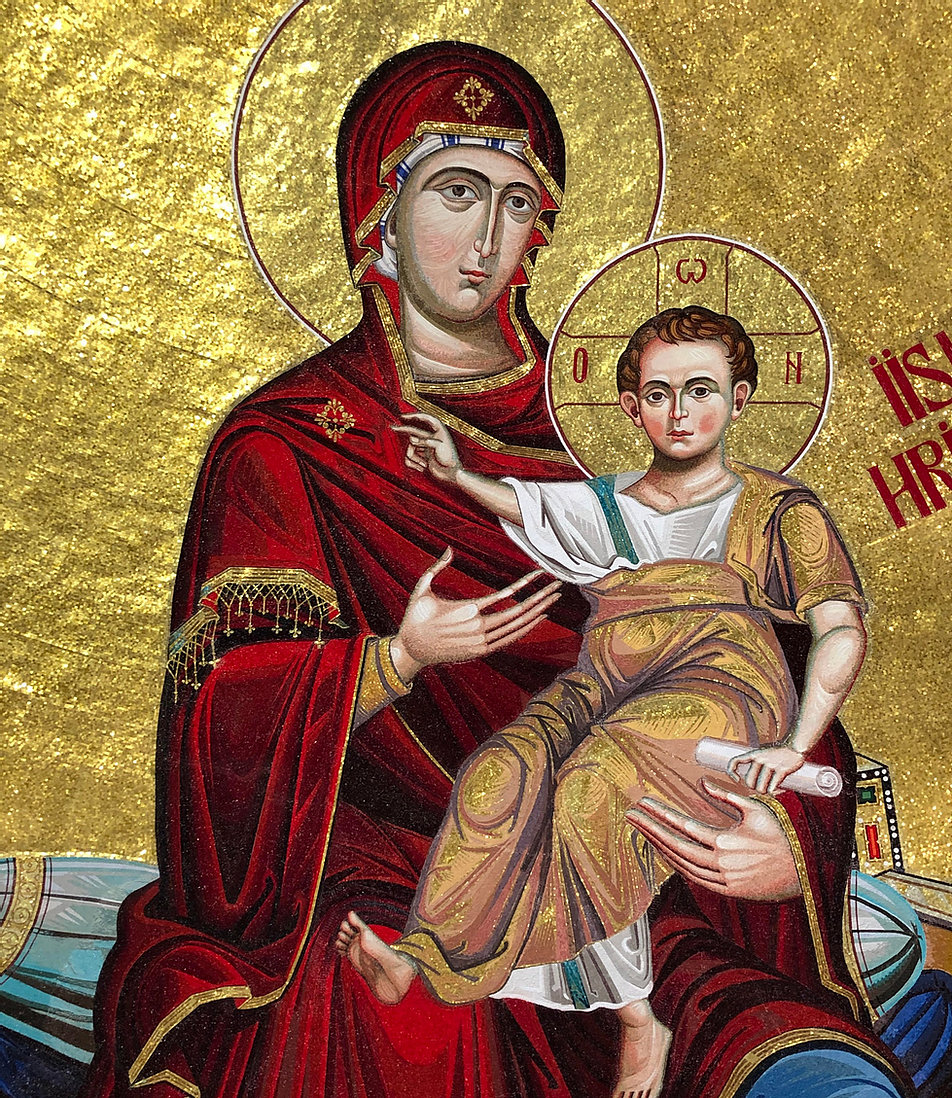 THE ICON, SYMBOL OF THE ENCOUNTER OF MAN WITH GOD

The icon is a true synthesis of the deeds of steadfastness in Christ, rendered through church art. Beyond the sign of verticality that it evokes and based on which it creates an interdependent relationship between heaven and earth, the icon has an essential and defining role on the way in which man looks at God, from his first moments of life, but especially on the framework in which the living Creation meets its Creator. Thousands of testimonies have been recorded about the mysterious face and the existence of life in the iconographic depiction, which continue to exist today through the work of divine Grace, which makes us, in the Orthodox faith, say that the icon is more than an adapted iconographic and stylistic representation, but it is a lasting source of life.

A visual imprint of the holy prototypes, located at the confluence between the Liturgical Tradition of the Church and the history of the Byzantine and post-Byzantine world, the icon also has a strong educational role, sharing with the faithful holy models of Christian living.

The face-to-face encounter with God requires the display of the state of perfection of the divine image revealed to the Christian, who is seeking perfection. This encounter can take place only through the icon, which bears in itself a representation of the unchanging and steadfast image of God and of the saints through whom He is glorified. This is the point in which the icon reaches its role as a window to heaven, through which the true Light enters, in a consensual way, into the soul of the Christian.

ICONOGRAPHY AND STYLE AT THE NATIONAL CATHEDRAL. TRADITION AND CONTINUITY

The character of the testimony of faith that the icon bears is closely related to the character of preserving the consciousness of perpetuating the presence of God in Christian life. These two important characters of the icon take the form of a full visual testament recorded on the walls of the People’s Salvation Cathedral, meant to carry forward the teaching of the Orthodox Church and Christian followers.

The perspective of the importance of the path tailored to learning is also based on the words of artist Horia Paștină who explains that “A road that does not lead to learning is a road that leads nowhere.” Therefore, nothing is accidental, everything has order, both in the content of the iconographic representations and in their forms of stylistic expression that cover the interior of the People’s Salvation Cathedral.

By using sources of inspiration from both Byzantine art and medieval Romanian art, through their iconographic conception, the stylistic manner that is adopted, the ornamental repertoire that is used, the mosaics of the People’s Salvation Cathedral aim to visibly reproduce the local character in church art. It can be fully expressed only by truly assuming our iconography of Byzantine tradition, namely by the firm anchoring in the safe soil of centuries-old tradition, the tradition being a living chain that starts from the past, lives in the present and bears fruit in the future.

About the iconographic concept 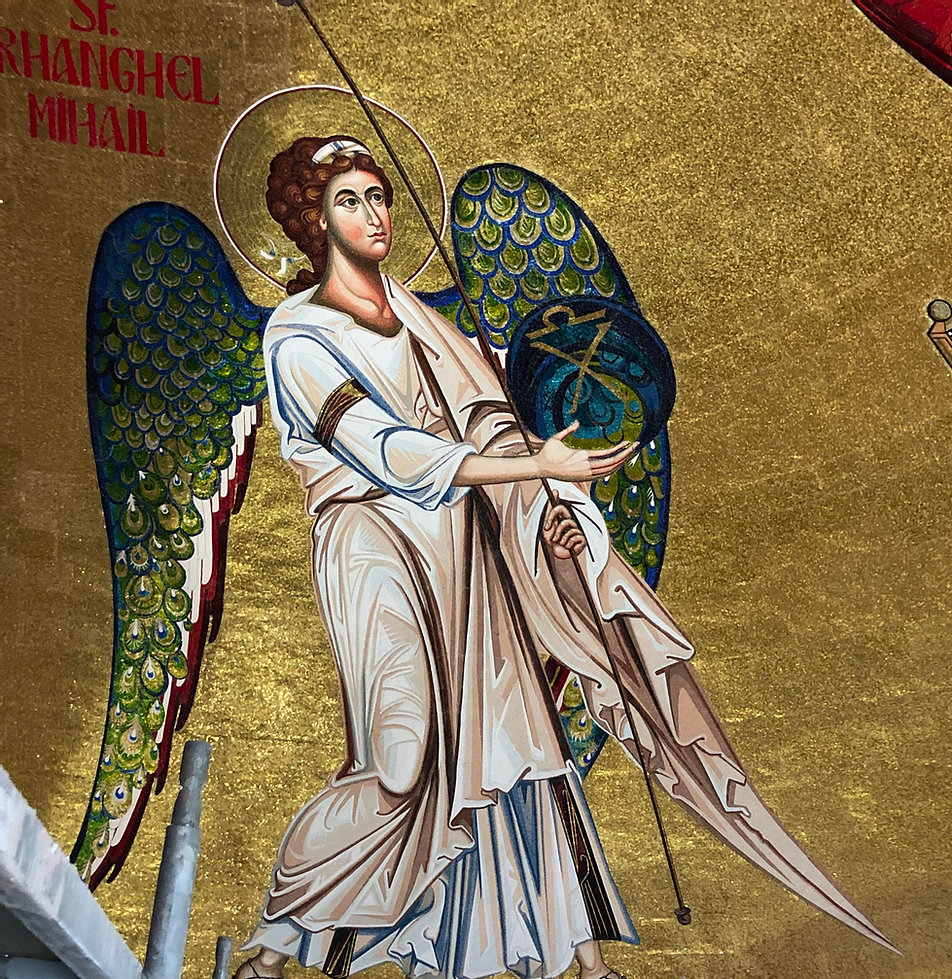 THE MOSAIC OF THE NATIONAL CATHEDRAL

The mosaic technique is the most expressive form that could be used in the interior decoration of the People’s Salvation Cathedral, due to the fact that the mosaic encourages the eyes to travel and discover, depending on the movement, a state of liveliness of each holy face that covers the church walls. This is also one of the most important roles that the mosaic technique has in iconographic rendering.

So far, out of the interior decoration of the People’s Salvation Cathedral, an area of ​​approximately 3,000 sqm of mosaic has been made, in the most difficult sector, out of an estimated total of 25,000 sqm. This sector includes the iconography of the altar and of the iconostasis, which is embellished by a lined-up sequence of 45 icons, which illustrate the holy prophets of the Old Testament, the holy apostles and feast scenes and the great royal icons.

People’s Salvation Cathedral rises, from a land Christianized by apostolic and martyr blood, not as a towering ornament of the nation, but as a living branch of the Romanian Orthodox Christian nation, which continues to build its existence and beautify its Altar built on “The corner headstone “, “which the builders refused”, even in difficult times, in which it seems that the Orthodox soul was scattered.

The work of the People’s Salvation Cathedral is more than a Christian proof of the identity of the Romanian nation, it is a symbol of unity, peace and love of the nation, which calls us with each bell chime.

The perpetuation of the act of Christianization and of the work for saving the Romanian soul is a duty that belongs to all Orthodox Christians, as we are called to express our true faith and to build the image of Christ on the foundation of the church. Thus, we embody a living and powerful will, which we entrust to our followers in faith. 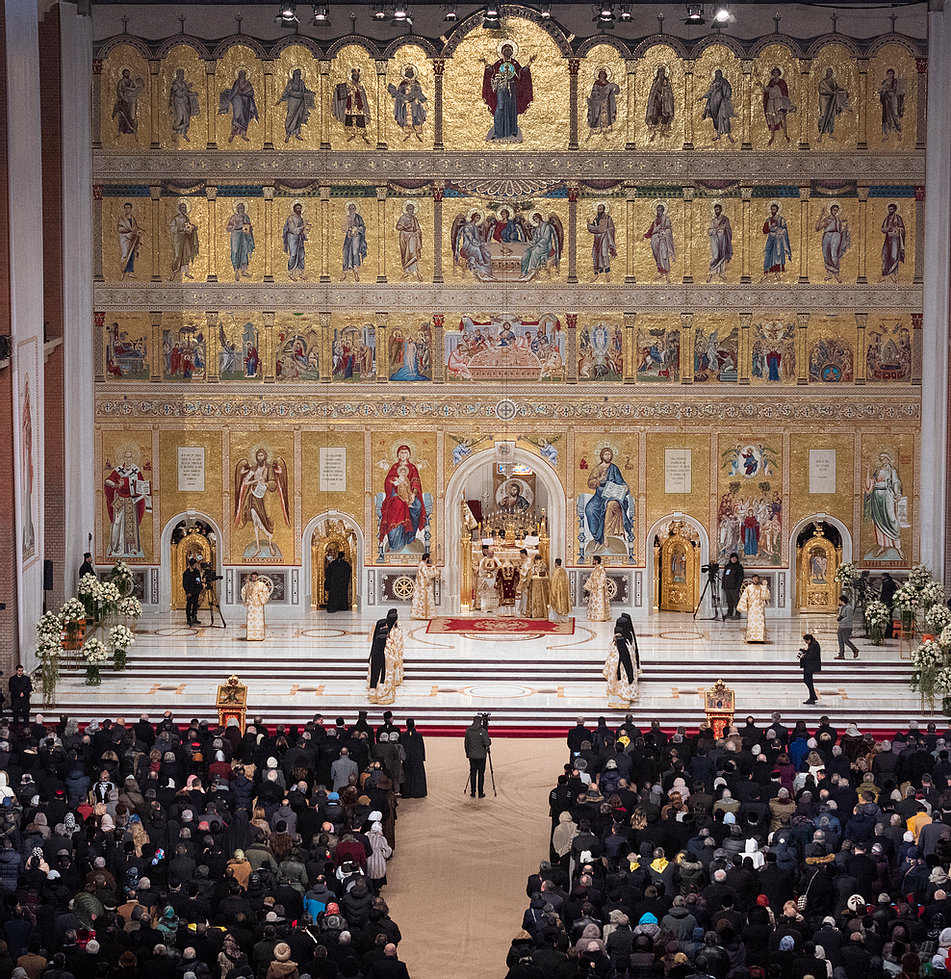 TO THE PAINTING OF THE PEOPLE’S SALVATION CATHEDRAL